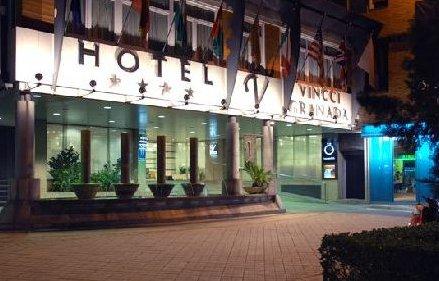 If you are planning for an ideal holiday destination in Granada and Province, the Vincci Hotel is a perfect place for you to reside and explore the surrounding areas.

Location
Situated on the Avenida de la Constitucion, the Vincci Granada Hotel is just a stone's throw from the neuralgic and business centre. The hotel is only few steps from the Gran Via de Colon, from where it is possible to enter the Albayzin quarter and visit the Alhambra.

Rooms
The hotel has 177 spacious rooms, all of which overlook the Alhambra or Granada city centre. All the accommodation units are equipped with modern facilities to ensure you an unforgettable stay.

Restaurant
You can dine at the on-site restaurant that offers an array of Andalusian and Mediterranean cuisine in a relaxed atmosphere.

General
This property offers well-equipped conference rooms, which is an ideal venue to host meetings and seminars, accommodating up to 500 delegates. Guests arriving with their own transportation can avail of the convenient parking facility, available on-site.