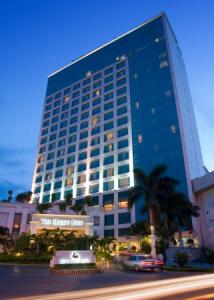 The Marco Polo Davao (The) is an oasis of charm within the exciting and blossoming city of Davao. Overlooking the Bay of Davao, This hotel is Davao's tallest building and a well-known city landmark. It is just a 20-minutes drive from Davao International Airport, and is within easy access of numerous Davao attractions. The Marco Polo, Davao offers 245 exquisitely designed rooms and suites, all with beautiful vistas, overlooking Mount Apo and the Gulf of Davao, symbolizing Marco Polo's commitment to comfort and elegance.
The Lotus Court offers the finest Cantonese cuisine in the Philippines. The Cafe Marco always has a warm welcome for guests for breakfast, lunch and dinner in a buffet style. The buffet is complimented by a unique a la carte menu, which highlights Filipino, Asian, Mediterranean, and International cuisine. Other facilities include meetings, a business centre, fitness center and an outdoor swimming pool.