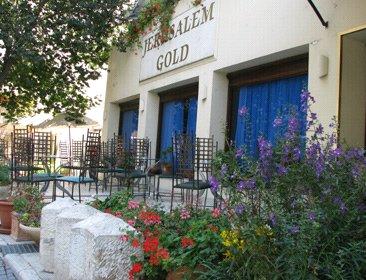 The Gold Hotel Jerusalem is located at the entrance to Jerusalem, across the street from the Israel Congress Center, and next to a large business complex. The 11 storey hotel stands across from the Binyaney Hauma, is just a 5 minute walk from the central bus station, from which you can find transportation for every part of Jerusalem as well as transportation to every city in Israel. The luxurious facilities, the quality of each detail, the decoration, the atmosphere, the homelike rooms, and last but not least, the famous mountain air and the view of Jerusalem, will all enchant you and enhance the magic of this remarkable city.
The Gold Hotel has 200 well-equipped guestrooms, featuring studios and suites. For your dining pleasure, there are two restaurants and a bar available. Business guests can make use of the business centre and other facilities offered. While enjoying your vacation or between meetings at the hotel, you can relax, replenish your energy and keep in shape in the health club. The hotel features Turkish bath, indoor pool, Jacuzzi, sauna, and a fully equipped weight room for your convenience.