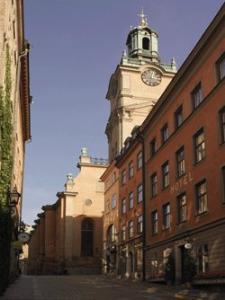 Location
The Lady Hamilton is located in the heart of Stockholm's Old Town, Gamla Stan. Only fifteen minutes on foot to the Central Station and similar in distance to the hustle and bustle, restaurants and nightlife of Stureplan. The Lady Hamilton is amongst the shops, bars and eateries of the cobbled streets of the historic city island.

Rooms
Rooms are designed and furnished individually to a high standard. They vary size and shape due to the age of the building but all are a pleasure in which to stay. They feature many personal touches and it is clear that a great deal of time has been spent on every detail.

Restaurant
The Lady Hamilton has a small restaurant where breakfast is served. Lunch and dinner can be taken at the Leijontornet, the restaurant of the Victory hotel, less than a five minute walk away.

General
A charming Superior First hotel located perfectly to enjoy the life and history of Stockholm. With so many unique features it is difficult not to enjoy this excellent family hotel which is sure to enhance your stay in Sweden's capital city.