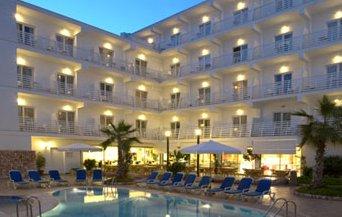 Location
The Barcelo Hamilton Hotel Menorca Island is situated in a beautiful natural bay in the port of Mahon, 800 metres from the crystal clear waters of Cala Padera Beach.

Rooms
There are 162 comfortable guestrooms, most of them with a sea view. All rooms have a terrace, fully equipped bathroom, air conditioning, central heating and other amenities.

Restaurant
For your dining pleasure, the hotel has a bar and a restaurant offering a la carte and buffet options.