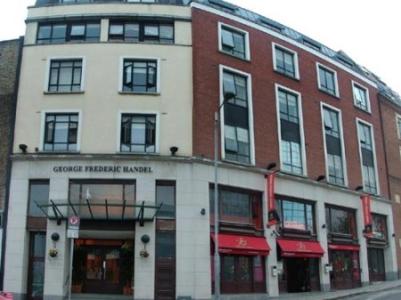 With an easy access to the airport and railway station, George Frederic Handel Hotel is an ideal base to explore the city of Dublin, and its surrounding attractions.

Location
The George Frederic Handel Hotel is enviably located on one of Dublin's oldest streets next to Christchurch Cathedral, on the edge of Dublin's vibrant Temple Bar area.

Rooms
George Frederic features 40 comfortable guestrooms that are gracefully furnished and come with an array of in room amenities. Disabled rooms are also available for your convinience.

Restaurant
At the Karma Late Lounge, you can sit back and enjoy the delights of Traditional Irish, as well as contemporary music, over a drink and have some lively chat, late into the night. Handel's Cafe Bar is an exciting pub with a great atmosphere, derived from its unique open design with several levels combining to give spacious and luxurious seating.

General
For those who love to shop, there are Dublin's top boutiques and departmental stores, available close by. You can also enjoy many musical and cultural weekends, standing on the grounds of the former Music Hall, on Fishamble Street.