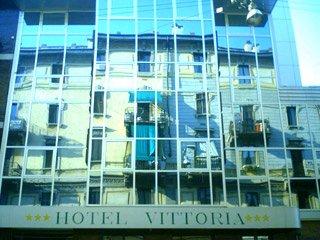 Due to its central position, the Vittoria Hotel Milan is the ideal place for holiday or business stay, and by tradition, it is family run.

Location
The hotel is situated right in the centre of Milan, in a quiet area, very well served by public transport. It is 5 minutes by car from the International Airport of Linate and very near the air terminals for Malpensa, which can be reached in 20 minutes.

Rooms
All guestrooms are quiet and are well equipped with modern amenities to offer a pleasant stay. Moreover, the customers have at their disposal non-smoking rooms and suites.

Restaurant
Guests can start their day with a healthy breakfast served at the hotel and later, can enjoy their favourite drink at the bar. In summer, breakfast is also served in the garden.

General
Day and night attended garage is provided for the guests who arrive by their own mode of transport.