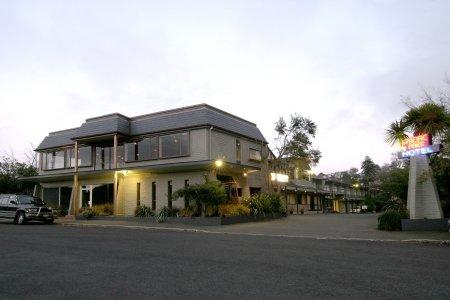 If you are looking for an ideal holiday destination in Dunedin, the Pacific Park Hotel is a perfect place for you to reside.

Location
Pacific Park Hotel Dunedin is situated in one of the city's exclusive central city suburbs, surrounded by native bushes and stately homes. Stroll through the gardens and gaze out across the panorama of Otago Harbour, while you relax amidst superior levels of comfort and generous facilities. Located in the Dunedin City Town Belt, the hotel is a secluded spot yet close to the main attractions of the city. The hotel is a quiet restful place, reflecting New Zealand's love of the indoor or outdoor lifestyle. Relaxation is the order of the day and the warm, friendly decor puts you immediately at ease.

Rooms
The hotel has comfortable and well furnished rooms that are equipped with modern amenities.

Restaurant
Award winning cuisine from international chefs, blending dishes from New Zealand and the South Pacific - your taste buds are in for a treat when you dine at the onsite Upside Brasserie.

General
The quiet, peaceful location of Pacific Park Hotel is ideal for conferences. You can choose from three popular conference rooms, seating up to 200 people. With an accommodation for 130 people, the hotel is the perfect place to get together, stay in comfort and take time out to enjoy the surroundings of Dunedin and Otago.