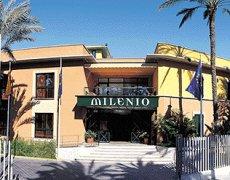 The Milenio Hotel is located minutes away from the urban centre of the city of Elche, in the heart of the palm grove, which was declared World Heritage in the year 2000. Mixture of Mediterranean cultures impregnate each and every corner of this place. A careful interior design confers the hotel's comfortable family image.
The hotel is 5 minutes away from the "Huerto del Cura" Botanical Park, and very close to the Archeological Museum. It has 72 guest rooms, which are soundproof. The hotel is 15 minutes from Alicante airport and exhibition centre (IFA), it has easy access from the A-7 motorway and the Madrid-Alicante road.